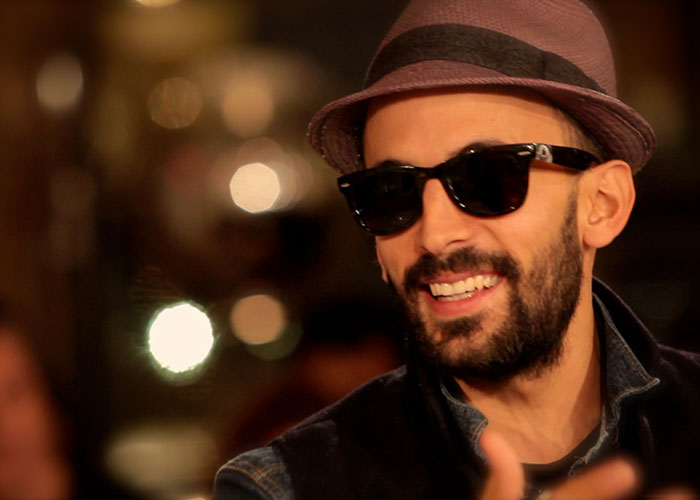 JR, a world-renowned activist and artist, is dressed in his usual simple hat and black sunglass disguise to keep his identity anonymous. He sits down with host, Deepak Chopra to share his thoughts on the power of art and the importance of shared artistry. JR electrifies the room with powerful ideas and dialogues explaining the intelligence behind his work. His art is a combination of practice, expertise and passion. In order to complete each piece of art, he adds just the right amount of risk and then steps back, letting the art speak.

He continually connects people around the world and transforms their landscapes with large-scale artworks that reflect the surrounding communities. Working with the people of Israel and Palestine, in the favelas of Brazil, or on the streets of New York, he shines a much-needed light on the importance of bringing people together.

JR has the largest art gallery in the world. Thanks to his photographic collage technique, he exhibits his work free of charge on the walls of the whole world – attracting the attention of those who do not usually go to museums.

JR has created "Infiltrating art". During his collage activities, the local communities take part in the act of artistic creation, with no stage separating actors from spectators. The anonymity of JR and the absence of any explanation accompanying his huge portraits leave him with a free space in which issues and actors, performers and passers-by meet, forming the essence of his work.

In 2011 he received the Ted Prize, giving him the opportunity to make a vow to change the world. He created Inside Out, an international participatory art project that allows people from around the world to receive a print of their portrait and then billboard it as support for an idea, a project, an action and share that experience.

In 2014, working with the New York City Ballet, he used the language of dance to tell his version of the riots in the Clichy-Montfermeil district. He created The Groves, a ballet and short film, the music for which was composed by Woodkid, Hans Zimmer and Pharrell Williams, and which was presented at the Tribeca Film Festival.

At the same time, JR worked in the abandoned hospital of Ellis Island, an important place in the history of immigration – and made the short film ELLIS, with Robert De Niro.

In 2016, JR was invited by the Louvre, whose pyramid he made disappear the with the help of an astonishing anamorphosis. The same year, during the Olympic Games in Rio, he created gigantic new sculptural installations throughout the city, to underline the beauty of the sporting gesture.