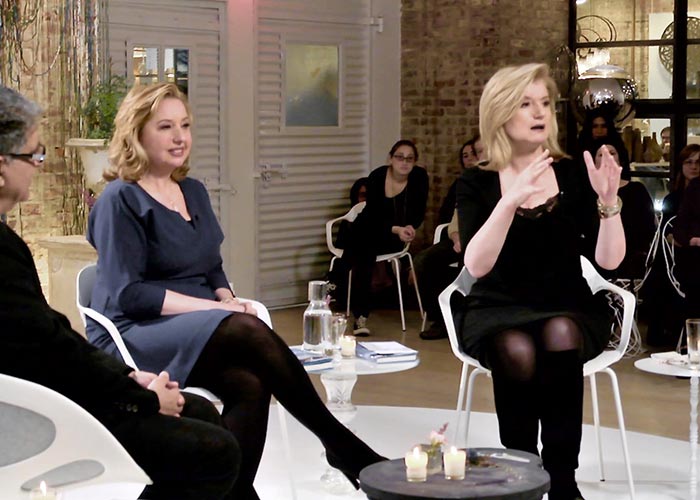 We know Arianna Huffington as a strong female force in the world of journalism and Agapi Stassinopoulos as a famous Greek actress. This episode goes beyond what’s known about these women by the public eye; Deepak Chopra unveils their personal childhood memories and struggles, their commonalities in Greek heritage, their friendship and the stories that molded their fiery personalities for achieving greatness in their respective fields.

Revel in the power of theater as Agapi indulges the audience with an impromptu powerful and emotional monologue from a Greek play that first transformed her career. This episode highlights the importance of finding opportunity, consistent perseverance and encourages creative women to find their spark.

Arianna Huffington is the founder and CEO of Thrive Global, the founder of The Huffington Post, and the author of 15 books, including, most recently, Thrive and The Sleep Revolution. In 2005, she launched The Huffington Post, a news and blog site that quickly became one of the most widely-read, linked to, and frequently-cited media brands on the Internet. In 2016, she launched Thrive Global, a leading behavior change tech company with the mission of changing the way we work and live by ending the collective delusion that burnout is the price we must pay for success.

She has been named to Time Magazine's list of the world’s 100 most influential people and the Forbes Most Powerful Women list. Originally from Greece, she moved to England when she was 16 and graduated from Cambridge University with an M.A. in economics. At 21, she became president of the famed debating society, the Cambridge Union.

She serves on numerous boards, including Onex and The B Team. Her last two books, Thrive: The Third Metric to Redefining Success and Creating a Life of Well-Being, Wisdom, and Wonder and The Sleep Revolution: Transforming Your Life, One Night At A Time, both became instant international bestsellers.

More with Arianna: One World Women

Agapi Stassinopoulos was born and raised in Athens, Greece. At age 18, she entered the Royal Academy of Dramatic Art in London and afterward became a member of the Young Vic. She moved to the U.S. to act, and later went on to earn her Master’s in Psychology from the University of Santa Monica.

While her sister, Arianna Huffington, was doing research for her book about Greek mythology, Agapi’s love for the gods and goddesses was ignited and led to two books of her own -- Conversations with the Goddesses and Gods and Goddesses in Love -- as well as a one-woman show and a PBS special.

Agapi speaks and conducts seminars worldwide empowering others to create the lives they want. She lives in Los Angeles and New York and is a frequent blogger for The Huffington Post. Her new book is titled Unbinding the Heart: A Dose of Greek Wisdom, Generosity, and Unconditional Love.